Why you should embrace an agile workforce

The importance of “agility” is commonly mentioned these days when talking about modern progressive organisations. But when it comes to business, what exactly does agility mean and how can it ensure the success of your company?

McKinsey Principal, Aaron De Smet, defines business agility as “the ability of an organisation to renew itself, adapt, change quickly, and succeed in a rapidly changing, ambiguous, turbulent environment.” Agility can also be described as the characteristic of an organisation to thrive when under pressure. A company that can react to changes and get stronger rather than weaker when faced with volatile or rapidly evolving market conditions is truly agile and will gain competitive advantages.

Embracing business agility means shifting from an organisational focus on just task or project completion towards an iterative mindset of continuous evolution. This allows companies to stay ahead of the curve by continuously modernising infrastructure and being responsive to changes rather than sticking rigidly to preconceived plans. For example, this allows defined outcomes to be achieved rather than merely ensuring a release date is met.

Agile organisations adopt digital technologies at the same time as investing in new skill sets for teams. This provides them with the analytical capabilities for generating insights and the strategic guidance the business requires in implementing new digital business models and ways of working.

Below we will cover the importance of agility and some of the most effective methods you can adopt to successfully develop it.

Why agility is important

The reason agility is more important now than ever is it captures the need to create processes and a broader culture that allows companies to evolve and thrive in constantly changing environments. Because of the ever increasing pace of technological developments and changing customer expectations, this means that modern businesses must be agile to achieve success. Being open to changes is not optional.

It is also important to understand that agility is not just a matter of changing processes and protocols. To genuinely achieve agility there needs to be a shift in thinking. This involves the clear understanding that agility is not something that’s adopted and becomes an overnight success (because there’s no such thing!). Instead, it involves a transition towards becoming forward thinking and open to identifying barriers that prevent capitalising on business opportunities.

It may seem a little counterintuitive but agility is actually also closely linked with stability. Agility does not mean being dynamic at the expense of having any established processes or being in a constant state of change or re-invention. In fact, most organisations require a sufficient level of stability in order to create agility and stability is one of the two core components of an agile organisation. A stable platform of things that don’t change is what allows for change in other areas.

The second requirement for agility is the capability to be dynamic. The ability to be responsive and to move quickly when necessary. When a company has a stable foundation, it acts as an anchor point so that other parts of the business can be dynamic. It enables the company to evolve and make changes where required in order to be proactive and remain competitive.

Because agility and stability go hand in hand, leaders should move away from the concept of having agility and stability on opposite ends of the spectrum. Many people falsely view one end as being fast, nimble, and agile with the other being stable, slow, and centralised. Therefore many companies, especially larger ones, try to think about where they want to be on that spectrum. This is the incorrect way to approach agility. To be effective, you actually want to be at both ends of the spectrum at the same time. Solid foundational stability with a dynamic capability.

Company structure is important and truly agile companies actually tend to retain fairly traditional structures. This means that the main structure remains constant so that staff have a clear idea of where they fit into the company, have a sense of belonging, and are able to ac 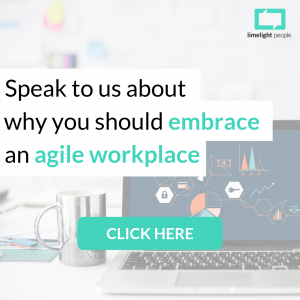 cumulate expertise. People do need to be able to be moved or assembled into temporary teams for specific tasks but all staff should always have a clear home within the broader structure to avoid them feeling like they are just drifting around or don’t have a clear career-

Governance is also key, as it essentially affects decision-making capabilities. Stability helps good decision making but speed is also important to allow people lower down the hierarchy to have a mandate to make timely decisions that affect the customer. The governance model of the company should be clearly defined.

The keys to agility

A 2017 study conducted by Oracle for the American Institute of CPAs (AICPA) found that agile organisations all shared the same main characteristics. These were identified as:

-Use of new technologies – deploying technology plays a big role in agility. Businesses can gain significant efficiency boosts by utilising new technologies such as AI, cloud services, machine learning, and big data analytics. These technologies underpin the foundations of agile organisations because they allow them to have lower overheads, be more responsive, be more efficient, and generate more useful strategic and business insights.

-Integrated cross-functional teams – technology and machines are the first step companies take towards improving agility but the performance of human teams cannot be overlooked. You need to have the right people with the right skill sets to leverage new technologies otherwise ROI on tech investments cannot be  maximised. The way that the talent is grouped and organised is also crucial. One example of how a modern tech company has used integrated cross-functional teams to great success is the Swedish based music streaming company Spotify. While the company started small, it rapidly scaled to the point that it now has 30 agile teams spread out over four cities and three different time zones. Each of these agile teams (that it calls squads), are groups of 6 – 12 people with different specialist skills. The squad is fully autonomous and self managed and organised. Each squad has a set task to accomplish and is free to choose its preferred methodologies. Face to face communication is encouraged over excessive documentation. Multiple squads can also work together in larger groups of 40 – 150 people that Spotify calls tribes. This allows the company to rapidly deploy squads for specific tasks and to combine them for more complex projects while still providing the developers the freedom to manage their own actions. Its an example of a highly effective way to deploy talent across departments so they can be best utilised rather than being siloed away. Agile companies such as Spotify create these mechanisms for quickly assembling teams with the right mix of skills so they can rapidly address emerging challenges and opportunities.

-Finance professionals with modern and highly developed skill sets – agile organisations have finance teams with key skills such as big data analytics and data visualisation skills. Other important skills include financial planning, commercial awareness, and influencing skills. The Oracle study also found that agile finance leaders were around 60 percent more likely than non-agile leaders to rate the levels of these less-traditional finance skills in their teams as “excellent”. So do not underestimate the importance of data visualization, big data, and influencing skills amongst finance professionals and these should be considered when recruiting new talent along with the more traditional financial skill set.

Agility also applies to the workplace itself. By creating flexible work patterns such as giving employees the ability to work remotely, this can not only increase employee efficiency but also ensures that more desirable places of work are created. Ongoing education and training is an additional foundational feature to establish agile tech teams. Staff need to develop the skills required to leverage new technologies and to implement new approaches.

Consider auditing your company’s current capacity for agility. This allows a baseline to be established from where you can either implement any of the relevant suggestions outlined above or utilise them to help you build a case for a pro-agility business approach.

When developing the metrics used to define agility and to set targets and objectives, it can be tempting to just have these objectives cascade down the management hierarchy. This can work but is not ideal as it tends to reinforce the silos that already exist within any large organisational structure. This can make the silos worse because at lower levels people are all working on different objectives. A more effective method is to identify key metrics within a process and ensure that any business unit that is affected by that decision or set of goals shares the same metrics and targets. This produces much better outcomes and also helps with integrating teams and maximising collaboration.

It’s time to make a switch.

There are definite attitudinal and strategic shifts that can be made by managers and company leaders to help instill agility within their organisation. This involves pushing the adoption of a pro-agility stance so that new technologies are embraced and new skills acquired via new talent or through training existing talent.

Always keep in mind that agility is closely linked to culture and it takes time and careful thought to build a healthy culture. Companies that are very agile also have distinctive qualities about their people and their culture that has been established over time rather than overnight.

Once a decision has been made to move towards greater agility, the company’s existing structural and business backbone should be defined so that areas beyond that can be iteratively changed to increase flexibility and efficiency. Retain strengths and core competencies and instead focus on implementing processes that allow the organisation to reallocate people rapidly when necessary. It is this combination of stability, flexibility, and the capability to be dynamic that leads to true agility.